From Permawiki
Jump to navigation Jump to search
Grow with Permawiki
A free permaculture reference and homestead handbook for sustainable living. 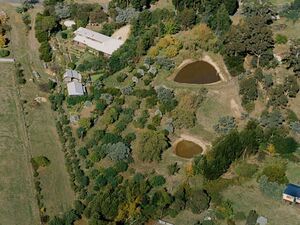 Melliodora, created by permaculture co-founder David Holmgren, is one of the best documented and well-known permaculture demonstration sites.

Permaculture is a design system for creating sustainable human environments that work with, rather than against, nature.[1] It is a holistic approach to create ecologically-sound and economically viable systems that provide for their own needs without exploitation or pollution.[1] Principles are derived from observations of natural systems, traditional farming system, modern scientific, and technological research.[1] Its methodologies are scalable and applicable to small home gardens to communities as a whole.[1]

Several individuals revolutionized permaculture concepts. J. Russell Smith, in 1929, used an antecedental term for permaculture in the title of Tree Crops: A Permanent Agriculture, a book which summarized his extensive experimenting with fruits and nuts as crops for food and fodder. Smith saw the world as an interrelated whole and suggested mixed systems of trees and crops underneath. His book inspired many individuals intent on making agriculture more sustainable, such as Toyohiko Kagawa who pioneered forest farming in the 1930s.

P. A. Yeomans popularized an observation-based approach to land use in the 1940s and keyline design as a way of managing the supply and distribution of water. In his 1964 book Water for Every Farm, Yeomans defines permanent agriculture as one that can be sustained indefinitely. 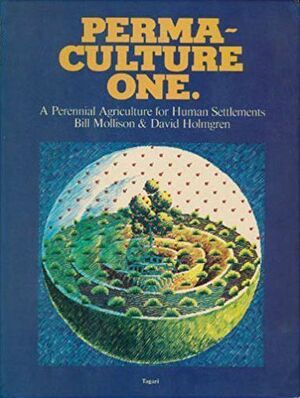 Permaculture One, written by Bill Mollison and David Holmgren and published in 1978, was the first book to introduce permaculture.

In the late 1960s, Bill Mollison and David Holmgren started developing ideas about stable agricultural systems. Dangers of the rapidly growing use of industrial-agricultural methods sparked these ideas. In their view, these methods were highly dependent on non-renewable resources, poisoning the land and water, reducing biodiversity, and removing billions of tons of topsoil from previously fertile landscapes. They responded with a design approach called permaculture, first made public in a co-written article in the Tasmania's Organic Farmer and Gardener newsletter title A Permaculture System for Southern Australian Conditions - Part One.[2]

Originally a combination of permanent and agriculture, the term was broadened to permanent culture from inspiration from the natural farming philosophies of Fukuoka with understanding that social aspects are integral to a sustainable system.

Following the article, Mollison was interviewed on Australian national radio by Terry Lane. In 1978, Mollison and Holmgren published Permaculture One and a permaculture magazine, titled Permaculture was started with Terry White as editor.[2]

After Permaculture One, Mollison further refined and developed the ideas by designing hundreds of permaculture sites and writing more detailed books, such as Permaculture: A Designers Manual. Mollison lectured in over 80 countries and taught his two-week Permaculture Design Certificate to hundreds of students. Mollison "encouraged graduates to become teachers themselves and set up their own institutes and demonstration sites. This multiplier effect was critical to permaculture's rapid expansion."