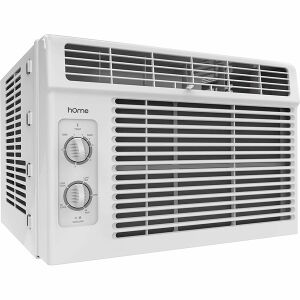 An air conditioner is an electronic device used to refrigerate a space, typically for comfort, for product preservation, or to maintain a safe operating temperature for equipment. It is a mechanical device that collects and concentrates heat energy from one space to release into another. The cold air created from air conditioners is ambient room air with its heat energy removed. The heat is moved elsewhere, typically outdoors.[1]

Alternatives to air conditioners are fans and swamp coolers, which may or may not be appropriate, depending on the situation.

How an air conditioner works 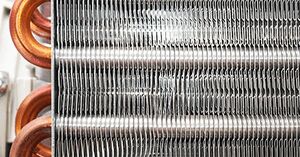 Fins inside the condenser and evaporator help to cool and heat the refrigerant.

The refrigerant is contained inside a tube. In its liquid state it slowly enters into an evaporator located inside the space to be cooled. A compressor on the other end of the tube is suctioning the refrigerant through the evaporator and towards it. This creates a low pressure environment which causing the liquid to phase change into its gas phase. During the phase change, the refrigerant absorbs heat, which is aided from metal fins attached to the tube that act as a heat exchanger. A fan blows air from inside the space over the tube to aid in the heat exchange which results in the cooling of the space's air.[1]

The compressor, located outside the space, draws the now gaseous refrigerant through the evaporator and into its chamber. Here, the compressor squeezes the gas into a smaller space to increase its pressure, temperature, and boiling point. The hot gas is released from the compressor through the pipe to flow into the condenser.[1]

The condenser is similar to the evaporator, except it is under high pressure. Fins on the evaporator help the liquid cool off which is further aided by a second fan. As it cools, it changes back into a liquid.[1]

A regulator valve at the other end of the evaporator helps maintain high pressure in this chamber. The regulator acts as a bottle neck, throttling the rate at which the refrigerant can pass, slowing down the refrigerant as it renters the evaporator inside the space to allow the process to continuously repeat as long as the compressor is running.[1]

Bent evaporator or condenser fins prevent proper air flow for the heat exchangers. Consider placing the air condition in an area where the fins cannot be easily pressed or bent. Special combs exist to allow for reshaping of bent fins.

Air conditioners consume a lot of electricity and may be difficult to power unless connected to the electrical grid. Consider using passive solar design principles to minimize initial heating to reduce the need of air conditioners.

A CoolBot is a device that allows inexpensive residential air conditioners to be used to cool spaces well below their intended range.