Electricity is the presence and flow of a sub-atomic particle called an electron. The electrons power electrical devices. Electricity can be generated near where it is consumed or it can be supplied from an electrical grid where the energy is produced remotely. It is well observed flowing through copper wires and stored in batteries. 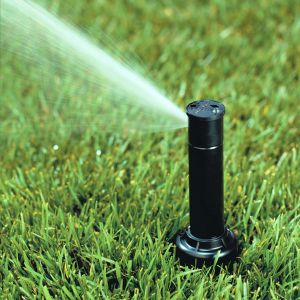 Water can be used as an analogy for electricity and an electrical current.

Water can be used as an analogy for electricity and an electrical current. For water to come out of a rotary sprinkler head, the water itself and pressure to force the water through the sprinkler is needed.

Electrons holds the electricity. In the water and sprinkler metaphor it is the water.

Voltage (measured in volts or V) is the pressure to move the electrons and can be thought of as the water pressure. Many electrical devices can only accept a specified range of volts and will not work or will damage the device if the voltage is too low or too high. If the water pressure is too low for a rotary sprinkler, the water will drip out and the sprinkler head it will not rotate. If there is too much water pressure the sprinkler head will blow out of its fitting. In the United States, power companies provide 120V of energy whereas many countries in Europe provide 220V of energy.

An amp (I) is a measurement of how many electrons are flowing past a particular point in one second. This can be thought of as much water is flowing out of the sprinkler each second.

A watt (W) is a measurement of how hard the current is flowing, and is directly related to both volts and amps. W = I × V

A kilo-watt hour (kWh) is how many electrons were used in an hour of time. kWh = W ÷ 1000 × hours A 60W lightbulb turned on for one hour would use 0.06kWh and a 250W computer left continuously running would use 6kWh per day. This can be thought of as how much gallons of water is used if the sprinkler was left on for an hour.

Electrical storage is expressed in amp hours (Ah). Ah = 1000kWh ÷ V A 6Ah battery can run a 5V electrical device for 0.03kWh, or 15 hours and 52 minutes if the device uses 1.89W when powered. This can be thought of as how much water is in a water tank. A larger water tank allows the sprinkler to run longer before the tank is empty.

Electricity is often generated from fuel sources that generate greenhouse gases or from limited sources such as solar. It can also be a significant expense. For these reasons, it is common to try to conserve the use of electricity. A power meter is often used in conservation efforts to help identify the amount of electricity certain devices use.