From Permawiki
(Redirected from Humus)
Jump to navigation Jump to search

Soil is a mixture of minerals, organic matter, and the space between that together support life on Earth. The space provides the ability to hold, filter, and release water, as well as allow precipitation to enter into the water table. It is a medium for plant growth and a habitat for countless organisms.

Rock is converted into minerals, and the space between, through weathering; the culmination of biological, physical, and chemical processes that break rocks apart or dissolves and reforms into minerals. Sand is weathered rock with large particles, silt are the medium sized particles, and clay are the fine particles. 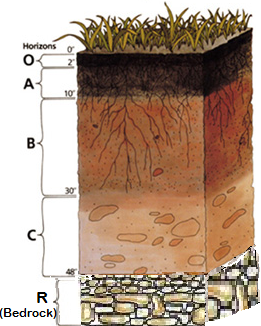 Soil is divided into different horizons, or layers.

When digging in soil, the distinct layers are visible with different colors, textures, and consistencies. Individually, each layer is its own horizon, and collectively, they form the soil profile. Worms, roots, and trillions of organisms are found in higher levels. The further you dig the colors transition from browns to yellows, olive, or red with less life. With enough depth, you may hit water, and eventually bedrock.

The O horizon (organic horizon, also called humus) is the layer of soil that contains fresh and partially rotted organic matter from plants and animals laying on the surface of the soil, unmixed with the lower soils. Leaf litter, especially, provides a large reserve of nutrients. This layer forms a rich mulch to absorb and conserves moisture, protect the soil from compaction from rainfall and foot traffic, and is an insulator to moderates soil temperature to prevent frost-heaving of plants and frozen roots.

The horizon provides refuge and hunting grounds to snakes, toads, small mammals, spiders, mites, and other predatory insects. Fungi, bacteria, nematodes, and protozoa enter and leave this horizon as conditions change in search of food.

Formed over time, tilling and raking debris interrupts or destroys this layer. These disruptions can also inhibit beneficial organisms, while encouraging undesirable fungi, bacteria, and insects.

The a horizon (assimilation horizon), commonly referred to as topsoil, is where microbes, insects, and other animals assimilate nutrients from the O Horizon, the soil incorporates organic matter into its composition, and where plant roots absorb water and nutrients.

Rainwater and organisms mix the organic matter into soil, where decomposition further breaks it down and incorporates its nutrients preventing them from washing away. Decay-resistant humus, which gives this layer its deep brown color, is a byproduct of this decomposition and increases the soil's aeration and water-holding and nutrient-storage capacities.

Soil organisms such as earthworms, potworms, arthropods, nematodes, fungi, and many species of bacteria and archaea are concentrated here, often in close association with plant roots.

Seeds germinate and roots form at this horizon, loosening the soil and secreting nutrients as they grow and die, with each species providing a unique signature of compounds.

Constant addition of organic matter from the O Horizon is vital to keeping the A Horizon healthy and vibrant.

The e horizon (eluviation horizon) appears in regions where rainfall is greater than evapotranspiration (where the water evaporates into the air and is absorbed by plants). If present, this horizon can begin a few inches below the surface of the soil or several feet down. It is the start of a transition between the living ecosystem above to a relatively lifeless mineral composition below. Here, there is a strong shift in color and starts appearing as a lighter, bleached color.

This horizon lacks organic matter and is made up predominantly of sand and silt. Due to its comparatively elevated position to other horizons, it has a relatively significant amount of water passing through that pulls nutrients down and out of this layer.

The b horizon (banking horizon), also called subsoil, is where fine clays and nutrients leached from higher horizons accumulate. Together, they synthesize to create mineral clays with high amounts of surface area and negative electrical charges that catch and hold passing nutrients. This layer catches the nutrients to keep them in reach of the plants and limits their ability to washout of the region to be carried downstream.

Roots thrive in this layer and draw these nutrients up and into the plants. Earthworms also pull these clays up, into the A Horizon and increases that horizon's ability to hold nutrients and water. Providing the worms with rich organic matter on top increases this mixing.

The c horizon (chemical horizon), or substratum, contains minerals that are weathered from the water and organic acids leached from the higher layers, and not from biological activity as seen above. Like the B Horizon, this layer also accumulates nutrients, but more soluble ones such as calcium, magnesium, potassium, and sodium. Very few plants are able to reach into this horizon.

In poor soils this horizon may start within one foot of depth, and over 100 feet deep in glaciated or alluvial areas or in valley bottoms.

The d horizon (durable horizon), or bedrock, changes very slowly and typically only through water or leached acids.

The type of rock that makes up this layer affects water drainage.

Soil consistence is the relative firmness or looseness of the soil in its undisturbed condition. It ranges from loose to very firm.

The soil texture is the fineness or coarseness of a soil, determined by the percentage of sand, silt, and clay particles.

Soil structure is the shape, alignment, and pattering of soil particles, such as blocky, platy, massive, or granular.