Broth is savory liquid made from simmered vegetables or meats. 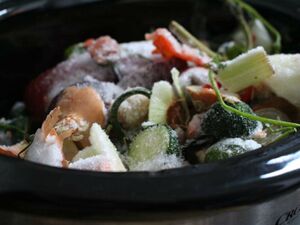 A slow cooker can be used to simmer vegetable scraps.

A broth is a savory liquid made of water in which vegetables or meat have been simmered. It can be consumed alone or used as a base in soups, gravies, and sauces. Bones are sometimes included, but stock is created when used as the main ingredient.

Vegetable broths can easily be made using most vegetable scraps and a slow cooker. Instead of directly composting or feeding livestock kitchen scraps, save the scraps in a container in the freezer. Once enough have accumulated, fill a slow cooker with the scraps and cover with water. Let simmer on low for 4-8 hours, filter and compost any remaining vegetable matter. Broth can be stored in the refrigerator for one week, or frozen for longer. Allow room for expansion if freezing and consider using ice cube trays before move to a longer use container for easier use.

Thoroughly wash all scraps before or after storing, and avoid using any cruciferous vegetables such as cabbage, broccoli, cauliflower, or Brussels sprouts as they make bitter broths. Wilted vegetables are fine to use in broth, but avoid moldy vegetables.

Vegetable scraps that can be used include:

To season broth, add any of the following to the slow cooker: