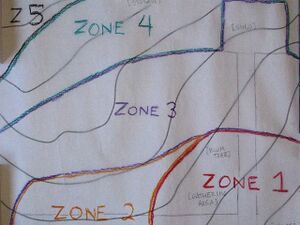 A development plan with incorporated zones.

A zone is a method of physically organizing design principles based on the frequency of use and attention needed with numbers ranging from 0 to 5. Frequently used elements or elements with higher attention needs are located close to the house in Zones 1 and 2. Elements that are used less frequently are placed into the outer zones.

As a general rule, the lower numbered zones should be developed first.[1]

Zone 0
The house, where permaculture principles would be applied in terms of aiming to reduce energy and water needs, harnessing natural resources such as sunlight, and generally creating a harmonious, sustainable environment in which to live and work. Zone 0 is an informal designation, which is not specifically defined in Bill Mollison’s book.

Zone 1
The zone nearest to the house, the location for those elements in the system that require frequent attention, or that need to be visited often, such as salad crops, herb plants, soft fruit like strawberries or raspberries, greenhouse and cold frames, propagation area, and a worm compost bin for kitchen waste. Raised garden beds are often used in Zone 1 in urban areas.

Zone 2
This area is used for siting perennial plants that require less frequent maintenance, such as occasional weed control or pruning, including currant bushes and orchards, pumpkins, sweet potato, etc. This would also be a good place for beehives, larger scale composting bins, etc.

Zone 3
The area where main-crops are grown, both for domestic use and for trade purposes. After establishment, care and maintenance required are fairly minimal (provided mulches and similar things are used), such as watering or weed control maybe once a week.
Zone 4
A semi-wild area. This zone is mainly used for forage and collecting wild food as well as production of timber for construction or firewood.

Zone 5
A wilderness area. There is no human intervention in Zone 5 apart from the observation of natural ecosystems and cycles. Through this zone we build up a natural reserve of bacteria, molds and insects that can aid the zones above it.