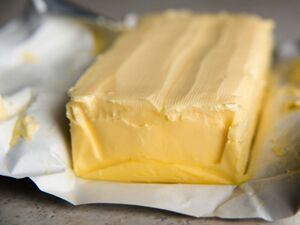 Butter is a common ingredient in food that is made from the cream found in the milk of animals such as cows.

Butter is a common ingredient in food that is made from the cream found in the milk of animals, with cow being the most common. It is made by churning the cream to create a solid of butterfat, milk solids, and water. The solid, called butter, is removed from the liquid called buttermilk. Commercially available butter is often salted and pressed into the shape of a block with the volume of 1/2 cup.

Clarified butter is the butterfat from butter where the milk solids and water have been removed. Clarified butter has a higher smoking point to allow it to be used for cooking in high heat. It also has a longer shelf life than fresh butter, and removes lactose and casein from butter which can cause allergenic reactions to some.