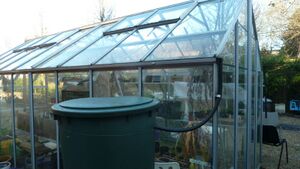 Rainwater harvesting is the accumulating and storing of rainwater for reuse before it reaches the aquifer.

Rainwater harvesting is the accumulating and storing of rainwater for reuse before it reaches the aquifer. It has been used to provide drinking water, water for livestock, water for irrigation, as well as other typical uses. Rainwater collected from the roofs of houses and local institutions can make an important contribution to the availability of drinking water. It can supplement the subsoil water level and increase urban greenery. Water collected from the ground, sometimes from areas which are especially prepared for this purpose, is called stormwater harvesting.

Gray water is wastewater generated from domestic activities such as laundry, dishwashing, and bathing, which can be recycled on-site for uses such as landscape irrigation and constructed wetlands. Greywater is largely sterile, but not potable (drinkable). Gray water differs from water from the toilets, which is designated sewage or black water to indicate it contains human waste. Black water is septic or otherwise toxic and cannot easily be reused. There are, however, continuing efforts to make use of black water or human waste. The most notable is for composting through a process known as humanure; a combination of the words human and manure. Additionally, the methane in humanure can be collected and used similar to natural gas as a fuel, such as for heating or cooking, and is commonly referred to as biogas. Biogas can be harvested from the human waste and the remainder still used as humanure. Some of the simplest forms of humanure use include a composting toilet or an outhouse or dry bog surrounded by trees that are heavy feeders which can be coppiced for wood fuel. This process eliminates the use of a standard toilet with plumbing.

One inch of rain falling on one square foot of a surface collects 0.62 gallons of rainwater.