From Permawiki
(Redirected from Element)
Jump to navigation Jump to search 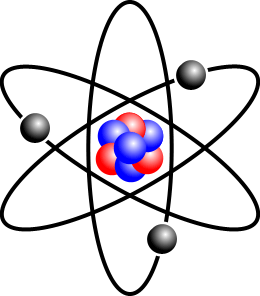 A simplistic model of an atom, showing protons and neutrons in its center, with electrons on the outside.

An atom is the basic unit of matter, comprised of protons and neutrons in its center, and with electrons on the outside. Atoms range from 0.1 to 0.5 nanometers in width[1], with one nanometer about 100,000 times smaller than the width of a human hair[2].